COMPROP DISAPPOINTED BY SAFARI BOARD NOT PROPOSING SCHEME

Comprop has tried since late 2018 to engage with the Safari board in a meaningful manner to agree a friendly transaction that it believed would be in the interests of all Safari shareholders and would also make strategic sense for Comprop. Our approaches, which included the submission of three non-binding indicative offers, were consistently rebuffed by the Safari board and ultimately left us with no choice but to make an unsolicited, all cash, fully guaranteed offer to acquire the entire issued share capital of Safari. The Comprop proposal represented a substantial 38.8% premium to the clean price per Safari share on the day before the Comprop proposal was presented and was made at the time when the Safari board had already proposed a “friendly merger” with Fairvest Property Holdings Limited (Fairvest) at a value that was significantly below the value of the Comprop proposal.

Comprop considered its proposal to be a full and fair offer that would enable Safari shareholders to unlock significant value at a price level in excess of that which they are likely to otherwise attain in the medium to long term by remaining invested in Safari. This view was not only supported by an independent expert’s fair and reasonable opinion, but by the largest institutional investors in Safari, who all supported the Comprop proposal and provided Comprop with irrevocable undertakings to vote in favour of the Comprop proposal and to reject the Fairvest transaction.

On this basis we expected that, following the receipt of our proposal, the Safari board would promptly make a firm intention announcement, appoint an independent board, provide Safari shareholders with an independent view on the merits of the Comprop Proposal and ultimately give them the opportunity to vote on the proposed scheme at a scheme meeting. Unfortunately, rather than doing the above, the Safari independent board and its advisors and associates appear to us to have spent a considerable amount of time and extraordinary effort to solicit and procure letters of intent and irrevocable undertakings from over 100 small Safari shareholders (Dissenting Shareholders) to vote against the Comprop proposal.

Safari has now published the irrevocable undertakings on its website, but without disclosing the names of the Dissenting Shareholders.

We are disappointed in the manner in which our proposal, which enjoyed support from the majority of Safari’s shareholders, was dealt with by the Safari independent board and we trust that Dissenting Shareholders received the requisite independent advice on the advantages and disadvantages of the proposal before undertaking to vote against it.

Comprop has a number of alternative investment opportunities that it had put on hold during the course of this proposed transaction and we will now continue to pursue these opportunities. 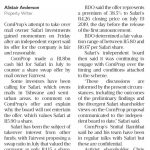 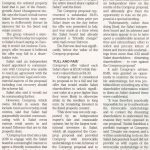