Lutho Thomas was the recipient of the first Community Property Fund Lawhill Maritime Bursary. His journey at Simon’s Town Lawhill Maritime Centre (“Lawhill”) began at the beginning of his Grade 10 year in 2017. Lutho is originally from KwaZakhele, a township 12kms out of Port Elizabeth in the Eastern Cape. He was introduced to the Lawhill programme by a teacher from his previous school, Molly Blackburn High School, and he successfully applied for the Community Property Fund Bursary.

During his time at Lawhill, Lutho transformed from a reserved young man into an avid sportsman and leader. In 2019 he was elected Head Boy of Simon’s Town High School, was part of the Representative Council of Learners Committee and he regularly participated in extra mural activities including rowing, sailing, cycling and rugby. He also captained the rowing, cycling and sailing teams. He gained practical centre management work experience during his school holidays at Motherwell Shopping Centre and he also had the opportunity to promote the Lawhill programme to scholars in the Motherwell community. In addition, Lutho spent time at Capital Land’s head office, based in Cape Town, where he has gained exposure to all areas of property and asset management.

Lutho matriculated at the end of 2019 and he was accepted to the 2020 Maersk Learnership Programme in Cape Town, a 12-month programme combining classroom based learning and practical work experience. As Lutho neared the end of the learnership, he was faced with the decision to apply for a full-time position at Maersk or another company, to apply for tertiary education, or to enter the superyacht industry. After much consideration Lutho made the decision to pursue his dream of a career in the superyacht industry.

Marine Inspirations is a non-profit organisation, founded by Phil Wade, which was established to introduce the prospect of a career in international sailing to South African scholars from underprivileged backgrounds. Marine Inspirations raises funds annually to sponsor a group of Grade 11 Lawhill scholars on a trip to Palma Mallorca to experience the world of superyachting first hand. This trip was unfortunately cancelled when Lutho was in Grade 11, but he had been fortunate to meet Phil at a fundraising event in his Grade 12 year. Lutho had made an impression on Phil who had continued to keep in contact with him. In October 2020, Phil invited Lutho to Palma Mallorca, Spain. Within a month, through the support received from Capital Land and Marine Inspirations, Lutho had completed his STCW certifications, he had passed all required medical examinations and he was ready to start his career at sea.

The international travel restrictions imposed on South Africa as a result of COVID-19 presented a challenge in respect of flights and visa applications, and on the 27th of December 2020, Lutho finally departed from Cape Town to Palma. “It has been a stressful two months filled with loads of uncertainty but after being patient the big day has finally arrived for me to depart to Palma. I would like to take this opportunity and say thank you for all that you have done for my sailing career. This is only the beginning and a lot of effort and hard work has been put in by Capital Land, and Phil for the amazing opportunity he has provided to kick-start my journey to reach my goal as Captain in the superyacht industry”.

Lutho spent his first few weeks in Palma as a casual employee while simultaneously applying for jobs with the hopes of being offered a permanent position onboard a yacht. After three weeks of working at the STP Shipyard, Lutho was offered a position on Mirage, a 53-metre motor yacht captained by Captain Colin Richardson, a past student of Simon’s Town High School. “All hands are on deck as we creep into the spring and get ready for the summer season. It is almost time for us to depart Palma and venture out to the rest of the Mediterranean. It is a promising summer season ahead that will be filled with good quality experience on the bridge and on deck, and especially on the water. I’m looking to be the sailing instructor onboard”.

Mirage is currently in Italy and we will continue to follow Lutho’s journey as he works towards his aspiration of becoming a Captain in the superyacht industry. 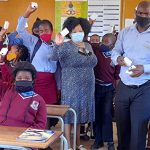 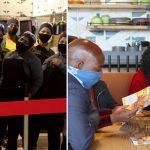